You may have seen the video coverage from the B2B press on the recent grand opening of the new Samsung Executive Briefing Center in Irvine, California. Watching video clips on YouTube gives you a glimpse of the opening events on April 25th. But eye-opening for this analyst was not just seeing the displays on view, up close and personal, in all their glory (some of that glory, HDR) but also several developments not actually in the room, that day, but discussed with Samsung execs. And how all that – together – tells a story of Samsung’s larger and very ambitious plans for the industry.

First, what happened when invited members of the press, and analysts, toured the venue last week? Let me answer it this way – the most important “guest” at the new Briefing Center grand opening, wasn’t any particular person, it was all the natural light entering the space. From huge wall-to-ceiling windows. That the space was so natural-light filled and airy, said more about where the best displays are going, than any number of bullet points and specs. How? All that ambient light showed how the new generation of both LCD displays – and more importantly large palette, direct-view LED – can cut through high ambient light conditions. 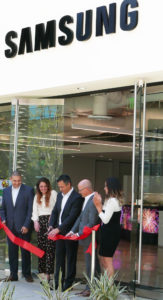 The light-filled 7,500 sq. ft. Samsung Executive Briefing Center (EBC) in Irvine features the full Samsung digital display portfolio. The new location is the third briefing center for Samsung in the United States. The others are in New Jersey, and New York City. The latter, called Samsung 837, after its 837 Washington Street, New York City location – I got a great look at last October when Samsung hosted press and other invited attendees to special sessions associated with Digital Signage Week in NYC.

“This was a long time in the making,” said Mark Quiroz, VP Product Marketing, Samsung Electronics America, Inc., at the opening of the new Irvine Center. “It offers the experience of all of our different technologies – and we have used a ‘blank canvass’ approach, letting the displays speak for themselves.”

Quiroz was referring – with the blank canvass idea – to the fact that all the content in the room can be tailored to address different vertical markets, depending on the visitors. But any visitor will see anything but blank canvasses. They’ll see solutions for AV, UCC, Retail, digital signage, place-based media.

At the opening of the Center, the displays that shown the brightest – so to speak – in the very high-ambient-light front section of the space, were Samsung’s LED Displays for commercial settings: their IF Series displays in fine pixel pitches of 1.2mm or 1.5mm. Samsung LED Display IF Series reach peak brightness levels, according to Samsung “nearly two times higher than standard LED maximum brightness norms… and conventional LED displays struggle to present red, green and blue color hues accurately and without distortion in low grayscale settings.” The company says that the IF Series displays alleviate these challenges through a unique grayscale management algorithm that maintains consistent R/G/B gradation for improved color accuracy. As a result, low-brightness indoor environments, such as galleries, museums and shops, can display content at optimal quality with uniform and precise color expression.

Also on view – present tense because the Center is now open to the public – is the new Samsung QLED 8K Signage that “pairs the market’s highest resolution display with AI technology [for scaling less than 8K original content] to produce lifelike images and allow users to enjoy immersive viewing experiences.:

With a resolution of 7,680 x 4,320 pixels, individual pixels in an image become imperceptible to the human eye. The QLED 8K display delivers enhanced color presentation through local dimming and Quantum Light Control as well as features HDR10+ along with 4,000nit peak brightness.

The Samsung Flip featured at the EBC is a according to Samsung “a versatile and portable digital flipchart that enhances today’s fast-paced, digital-centric workflow.” The 55-inch UHD display supports up to four simultaneous writers so teams can work together with ease. It drives greater collaboration, expands presentation capabilities and is ideal for all types of meetings, from training to group brainstorming. Also showcased was the QBN-W series, available in 75-inches, featuring enhanced touch technology, the intuitive MagicIWB S5 solution and UHD picture quality to boost productivity and collaboration.

What wasn’t in the space for the big opening the day I visited? Let’s start with two compelling programs from Samsung that are coming (very soon), and will be a great addition to the AV world as well as for end users.

Mario DiAntonio, Team Leader – B2B Technical Account Management at Samsung Electronics America, on hand to for the press tour April 25th, revealed, when I asked him about plans for the space, that in addition to being a demo room, and meeting center, the Briefing Center in Irvine will also be a Training center.

“We’re working on an extensive direct-view LED training program involving this Center,” said DiAntonio. “There will be two tracks of training around LED. A sales tracks, yes, but also Technical training, for installation, mounting, etc. In fact, we just started an LED certification program, and next month, we kick off, here, a two day course on site (and with and online component.) Then following up on that, Samsung will certify individuals who complete the training.”

The second program/event: Stephanie Man, Samsung Program Manager, Enterprise Sales & Marketing, who was also on hand at the Center, and in fact is in charge of its ongoing, day-to-day management, said – while demoing Samsung’s MagicINFO offering for digital signage – that on May 14-15 the company will host the first MagicINFO Summit at the facility. 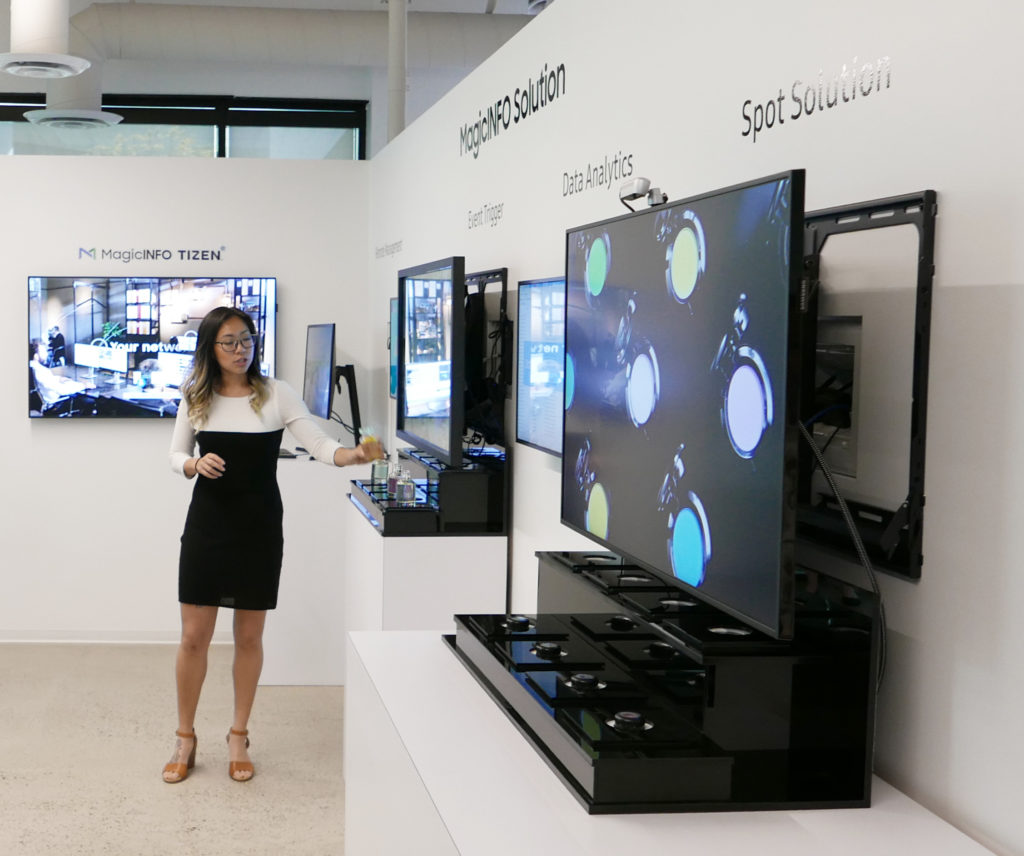 Stephanie Man, Samsung Program Manager, Enterprise Sales & Marketing, and in charge of its ongoing, day-to-day management, said – while demoing Samsung’s MagicInfo offering for digital signage – that on May 14-15 the company will host the first MagicINFO Summit at the facility.

And finally, a look at the most spectacular new display technology from Samsung at the Center also offers a peak at another bigger market: In the category of down-right spectacular is The Wall from Samsung. The 146-inch, MicroLED display does indeed “deliver intense black and pure colors along with outstanding brightness and contrast.” Its 0.84 mm-pixel pitch delivers near perfect viewing from any angle. Additionally, the bezel-less design enables the individual modules of The Wall to fit together seamlessly, removing limitations to screen size.

The Samsung ONYX installed at the Pacific Theatres Winnetka in Chatsworth last year, measures 33.8ft wide and 17.7ft in height, and uses 2.5mm pixel pitch LED, featuring nearly 9 million pixels. That configuration is 4K. But the product is also available in a 2K resolution configuration. 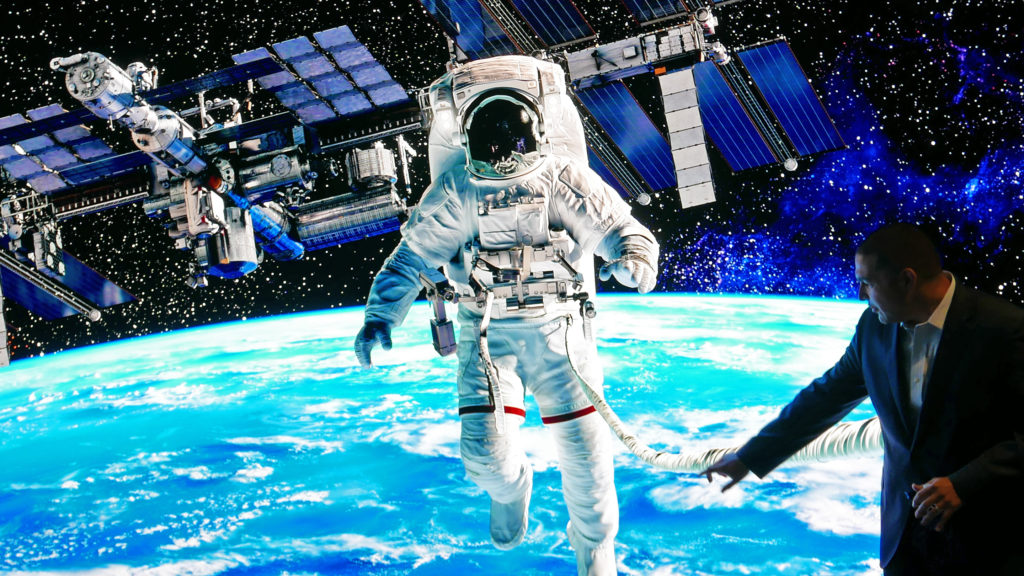 You can think of the other spectacular direct-view LED display from Samsung, The Wall, as a commercial AV and/or high end home theater version, so to speak, of ONYX. The Wall is of course higher pixel pitch, because it’s meant to be viewed at a closer range. I’ve seen them both, and they’re both spectacular. Hard to say which one more so, because they’re meant for different spaces and different content. The Wall is built around fixed “consumer” TV resolutions for that market and for commercial AV. But for commercial applications, you can scale it to what you want, and it does have ability to be other than 16×9. The Wall is: HDR 10+, deep black level, has an ambient mode (for adjusting to ambient light), and you can mount it directly to a wall if you want. And note that all Samsung LED, is front serviceable. The color space of The Wall: REC 709, so almost P3, but not quite. But remember The Wall is not DCI and is not meant to be, so it doesn’t need to be full P3.

ONYX is not on view at the new Samsung Briefing Center in Irvine, but it doesn’t need to be. The “showroom” so to speak for ONYX, in southern California, is the Chatworth theater. If you’ve an AV integrator or a corporate end user, you see what you need to see in the high end, fine pixel pitch direct-view LED department, with The Wall. If you do follow the commercial cinema market, you’ll be following what Samsung is doing there – the company will have some new announcements on that Cinema front very soon, I learned from Chris Simpson of Samsung, last week. Stay tuned.

In the meantime, the just-opened Samsung Executive Briefing Center in Irvine is open for visits by AV integrators and commercial AV and digital signage end users. And it’s way beyond a “showroom”, offering content, performance context, training, and more. It’s open five days a week from 9 a.m. – 5 p.m. in the center of Orange County.