The NBA – with its more tightly packed venues than what players or fans experience in any other pro sport – has always been at the forefront of using new generation technology to get the house a’ rockin’. NBA games were the first to max out the “scoreboard” beyond presenting score and stats, with sophisticated IMAG and graphics. With the scoreboard so close to the action, it was the perfect captive audience display environment – even if the size of the displays did not approach the “Jumbotron” scale of other sports venues.

The J word is in quotes here – I’m making a point. Anyone reading this cringes at that term, that we in the pro AV world abandoned decades ago. We’ve lived, uneasily, with the fact that the general public, sports fans, sports writers and even TV broadcasters still can not give up the J-ghost, despite the fact that Sony stopped manufacturing the ancient, low res Jumbotron in 2001. With the fans, and cameras, so far from the LED screens in NFL or baseball, you could always get away with using most any LED screens, couldn’t you? Or so the thinking was, apparently. LED, Jumbotron, Godzillatron – for the average fan or sportscaster it was all just one big screen. (That’s changing now, of course, but we’ll leave huge screen size LED and outdoor LED for other articles.)

NBA games have been a test-bed, so to speak, for new AV tools for fan engagement. What’s new in the market is that fan engagement now encompasses the entire venue, not just the playing court, the seats in the arena, and the living room-like private suites.

A good example could be seen at the Miami Heat’s home opener vs. the Charlotte Hornets, at the American Airlines Arena in Miami, on Saturday October 20th. Invited by Samsung to see the game, and their just-installed contribution to fan engagement at the venue, I can report that two industry trends are coming together in interesting ways. The trends are: the arrival in the market of new generation fine pixel pitch LED, and the new ramping up of display technology in all areas of sports venues.

At the American Airlines Arena in Miami, there is a pretty wide array of display technology that’s been installed for several years now. Beyond the usual LED scoreboard and LED ribbons around the stands, there’s a plethora of digital signage in the lobbies and concession areas. And there is nice array of NanoLumens direct view LED in the Plaza area outside the arena, that’s been written up in the press quite a bit (the cylindrical screens, under a huge overhang, look out to the ocean on side and a main entrance to the arena). But the new kid on the block Saturday October 20th (well, in the arena) was impressive: a 95 inch diagonal 1.2mm pixel pitch direct view LED screen from Samsung. Mounted in a main lobby/passageway for fans streaming into the venue and circulating within the venue.

Making the fine pitch LED installation happen – in breakneck speed to make the tight deadline of the Heat’s home opener – was AV Integrator, Acordis. Rehan Khan, Acordis president and CEO, was a firm believer in the need to replace the existing video wall (LCD panels, cascade configuration) with a large, seamless, high res, super bright display that would transform the architecture of the space from a hallway with a video wall to an immersive fan experience for the Heat. Khan knew that by getting rid of typical video wall bezels, and by going for the highest resolution that would be needed for fans walking literally just a few feet from the display, the results would be stunning. 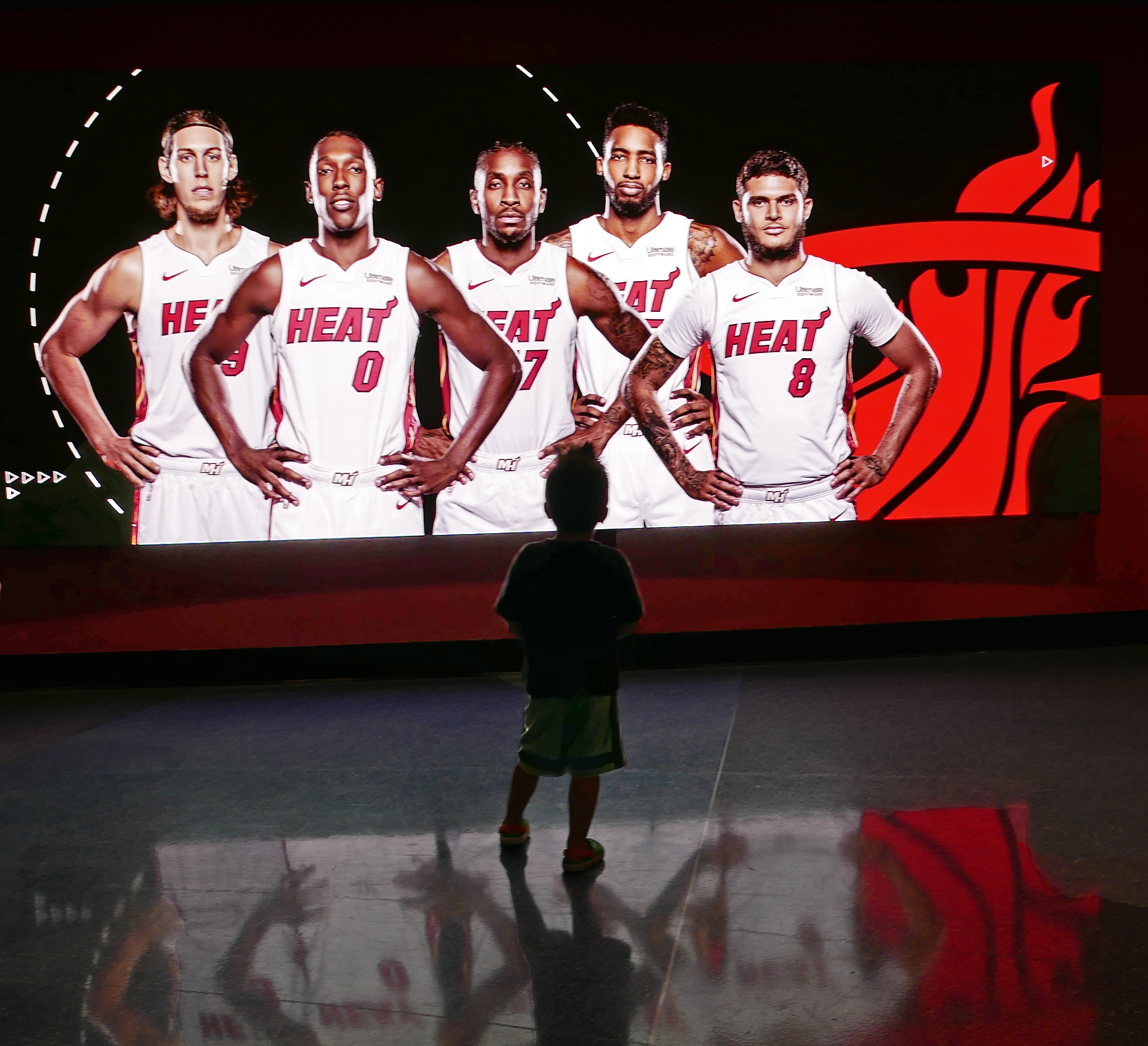 “This installation went down to the wire,” said Khan, at the home opener. “We won with our idea, through a competition where we put the new Samsung high res LED up against other options, for the Miami Heat to evaluate. The demo – Samsung had an ingenious portable 1.2mm screen to bring in – convinced them. Then, it was a lot of late nights. But Samsung is one of our best partners, and we made it happen. You can see the results – and now, we have several more high res LED walls being prepared for the venue.”

The Samsung 1.2mm LED screen, in the custom size (95 inch), is mounted with a PDS mounting solution. PDS is of course the division of Premier Mounts that tailors solutions for many custom installations including a lot of direct view LED. Premier Mounts had already been heavily involved in the American Airlines Arena, beginning in 2013, when the Arena unveiled the $3.5 million renovation of two exclusive Flagship Lounge restaurants reserved for Miami HEAT fans who invest in premium seats including courtside and Flagship seats. The project included a $600,000 digital signage installation designed to broadcast live Miami HEAT games, other Miami HEAT-related and special event content, and sponsor advertisements on a total of 107 displays in the two venues.

But this new high res LED screen is – forgive the pun – a different ball game.

Jay Farber, Senior Business Account Manager Professional Display Solutions – IT, at Samsung explained that with the 1.2mm LED screen, there is an ambient sensor, to adjust brightness. Sunlight comes into the space near the screen at certain times, so the sensor adjusts the NITs. At other times, the high NIT rating is dialed back.

“The Heat, wanted to do several things,” said Farber. “They wanted to be able to build to a custom size, that you see here now. Previously, they had a video wall in a cascade pattern, but it looked dated. They really wanted a seamless palette, for better effect. All in with this new screen, they love the new design, and results. In fact, more fine pitch LED is now being planned for the venue. There is a major new upgrade in design now, for the Box office area, where Samsung 1.5mm LED will go: 8 walls, in V-shaped mounts, hanging from ceiling.”

That box office area is super-important to the venue because as with the best arenas, there is huge number of concerts that take place there. And the box office is always active. During any given Heat game, they’ll be selling tickets to upcoming concerts. 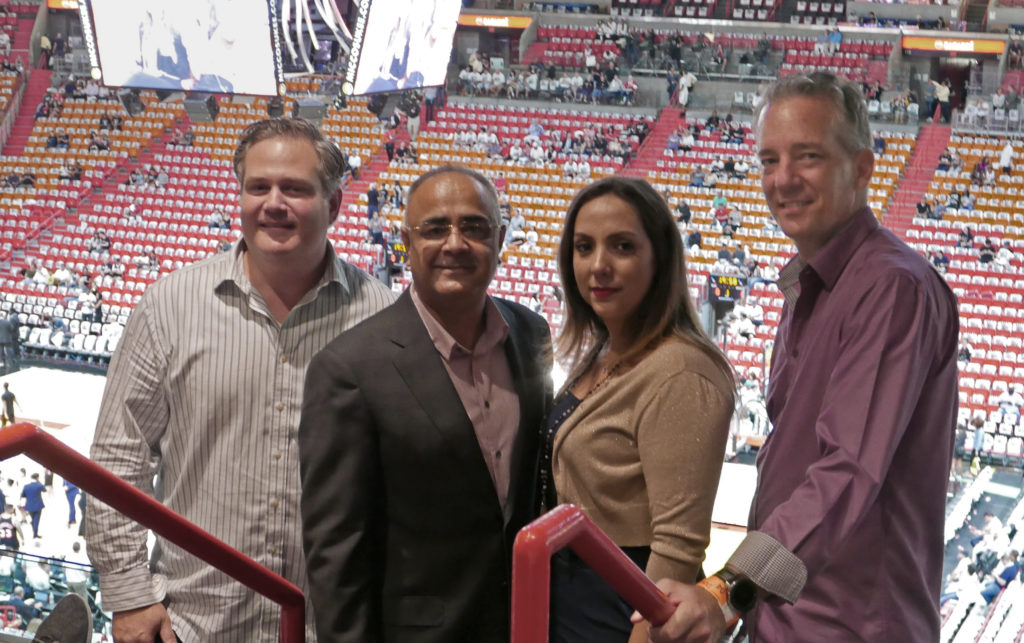 Rehan Khan together with his wife Narjis Khan who heads up marketing at Acordis International have been an integral part of the Miami Heat “family”, and they’re prominent in a variety of Miami charity and civic organizations, and have received many awards for their stewardship of one the fastest growing integration companies in the country. Any visit to Miami – and particularly the American Airlines Arena – bears that out, as they know, seemingly, everyone at the venue and beyond.

As for the future of direct view LED displays – as the Khan’s saw from the outset – this installation bodes well for AV integrators, and sports fans. And for equipment manufacturers that are well-positioned to step in and fill a new market need that goes beyond “video walls” and toward a more compelling, immersive architectural palette.