David Keene: Coffee and Controversy at Google HQ in NYC

In what turned out to be the most vibrant Digital Signage Week in years – Digital Signage Week is the annual, somewhat informally organized group of events and conferences that takes place over five days, each autumn in New York – the most well-attended event was the Digital Signage Federation-sponsored and Google-hosted “Coffee and Controversy” panel and sessions that took place the morning of Tuesday October 30th. The event drew over 200 attendees to Google’s NYC Headquarters – and as promised by the organizers there was no shortage of straight talk and indeed controversial commentary. Moderated by Dave Haynes of Sixteen:Nine, Chris Riegel, CEO, Stratacache, Jeff Hastings, CEO, BrightSign, and Beth Warren, SVP, Creative Realities delved into key issues and challenges facing digital signage and DOOH design and deployment, with most of the focus on how the technologies are being integrated into retail environments and retail strategies by retailers and brands. But the session brought to the fore broader, non-retail issues as well, including privacy issues with screen-based networks and a variety of hardware and software challenges in the broader digital signage arenas.

Despite the fact that the retail market makes up less than half of the digital signage market, indeed much of the industry sees the retail market as having the most upside. Market penetration of AV, video, and digital signage technology into the other markets – education, enterprise, transportation hubs, etc – while not reaching anything like saturation levels is progressing apace, with no serious impediments to growth. Retail is a market apart, both in terms of its potential (huge) size, and the adoption challenges unique to retail that have led to perennial frustration for many.

Anyone reading this report has probably attended dozens if not a 100+ industry seminars, panels, and sessions on the retail market – exploring how retail spaces are attempting to improve shopper engagement and shopper conversion (from shopper to buyer) with at-retail tech tools including display/networking/content tools. While those attempts have been key to retailers and brands strategies for well over a decade, they have now reached a level of urgency if not panic in some sectors as many retailers are in full existential crises as Amazon and other online shopping behemoths are threatening to turn many retail spaces into no-conversion showrooms for the online sales/fulfillment platforms. Has the quest for better shopper engagement now morphed to a quest for retail survival? In some quarters, yes. But retail is such a vast market that sweeping generalizations are not often useful. QSR is retail, and it’s not in panic mode but thriving (as is the larger restaurant sector). Sports arenas and stadiums are now retail destinations, but that market is booming, even as televised or streamed sporting events also boom – showing that the one does not prevent the other. And even among traditional retailers that just sell goods off shelves, it’s a complicated landscape. That being said, the big trends evident in the headlines of the trade press and the mass media are pretty dramatic.

At the DSF Coffee & Controversy panel, kicked off by Rich Ventura of NEC, who is also the chairman of the Digital Signage Federation (shown in the main photo at top of this page), several of the panelists painted a picture of the retail environment that while more challenging than ever, still offers the promise of tech breakthroughs to take all players – retailers, brands, integrators, content providers – to a new level. But a crisis mood is in the air in much of retail. 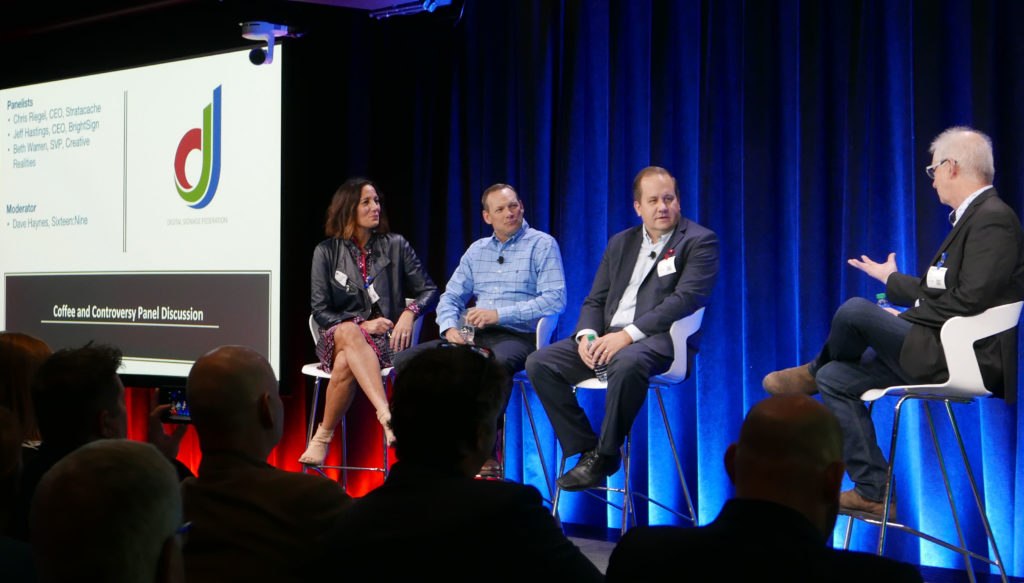 According to Jeff Hastings of Brightsign, the company that has carved out big market share in providing media players for digital signage deployments, brands are now asking agencies to engage more with retail, where in the past most agencies would not want to bother with the small at-retail message – small in relation for TV and other media buys. The need is urgent. Why the urgency?

Chris Riegel summed it up. “Social has jumped the shark,” said Riegel, referring not to social media use among consumers, but rather social as marketing tool for B2C by retailers or brands. Also, “in social, they were faking results” he said, alluding to the problem of squishy data, or worse, from the big social companies that was being given to the brands and also to news outlets in license agreements for FB for example. “With at-retail, you can’t fake the data,” said Riegel at the DSF session.

And Riegel alluded to the growth of OOH and DOOH in response to both the above trends. And he added that compounding the trend is that in today’s agency and ad landscape, with Google and Facebook now drawing most of the money out of what used to be the ad agencies’ realm (i.e. Google and FB ad buys now having captured more than half of the ad budgets of companies), there is more urgency than ever to shift marketing money to in-store.

At the session October 30th, I asked Riegel, why, given those trends, there are not today more “place-based networks” to take up the slack, where you can do a network buy – as everyone predicted would be the case a few years ago. And I pointed out that I was recently in an NFL stadium, talking to the head of partnerships and marketing for the NFL team, and he said that their in-house team sells all the screen time in the venue ad hoc, i.e. there is no cross-NFL stadium “network buy.” So it seems that the much-promised DOOH cross platform buy has not fully materialized.

“You have big media companies, the JCDecaux’s, where you can do some large tier buys, but the rest of the industry is incredibly fragmented still,” said Riegel. The DPAA efforts are going on,” he explained, referring to the association that was in fact holding its annual big conference in NYC that same day. “There is activity around programmatic and other systems, but it’ fragmented still,” said Riegel. “It’s easy to buy New York, but hard to buy Peoria.”

“Technology does not always fit into their model,” commented Beth Warren, SVP, Creative Realities. “They [the agencies] have to bring in partners”, she said.

Warren added that today agencies are being compensated differently, requiring them to do business, including on the retail side, differently. But she stressed that the changing models bode well for retail. “The agencies now get compensated for enabling the brand to be more impactful in all media,” she said.

Inevitably, any panel session on digital signage and electronic messaging eventually turns to more technical issues. Fist up, down that road at the session, was the topic of the split in screen/content management solution providers’ offerings – between the traditional camp where the ideal model was to have screens be screens, letting the content be driven to the screens by external media players (of either the appliance type or the PC/Windows type), and in the other camp, the media player function embedded in a screen itself. The latter is of course the SoC (system on a chip) offering, that we see increasingly being offered by the big screen manufacturers – all of whom of course still offer their commercial customers pure commercial grade screens not featuring SoC-embedded media players.

It’s no surprise that Jeff Hastings – whose company manufactures and sells not SoC solutions but traditional, separate media players – would prefer the dedicated media player approach. And indeed BrightSign has won big market share with their robust offerings there. But Hastings didn’t bash the SoC technology – he pointed out that the technology came from a consumer TV solution, with a streaming focus. “How much streaming do we do in digital signage?” asked Hastings. “Hardly any. We find that people are disappointed, if they want to scale up, from a SoC solution. But it’s a good entry point – and they upgrade later with us,” he offered, half in jest.

Chris Riegel had strong opinions about SoC – and I’m being conservative in my comments here. He’s not a fan – for corporate security reasons, and he made some bold statements based, apparently, on anecdotal evidence from two corporate deployments in the field. With a big emphasis on “anecdotal”. You can check the podcast of the event from David Hayne’s sixteen:nine website, for a full account of that exchange (and the entire session).

From the SoC and security discussion, attention was turned to software issues. In any industry, software issues and software business models are always different from hardware models.

“The pure software companies always struggle,” said Jeff Hastings of Brightsign. “Pure software is always a hard sell. And, at scale (thousands of screens) no one is paying full end point price. And all the services attached, have very low margin. Recurring revenue ends up being small. But if it’s all packaged together, like what Chris does, it works, you get a lot of revenue coming in.”

Chris Riegel pointed out that his company tracks 3,200 CMS companies around the world. “3,100 of those are sub-$5m in revenue, and then you tier up, and it gets thin.” Riegel said that with Stratacache, if a CMS company they are looking at, has 50+ deals a month, that’s a good bar they need to achieve to be considered. 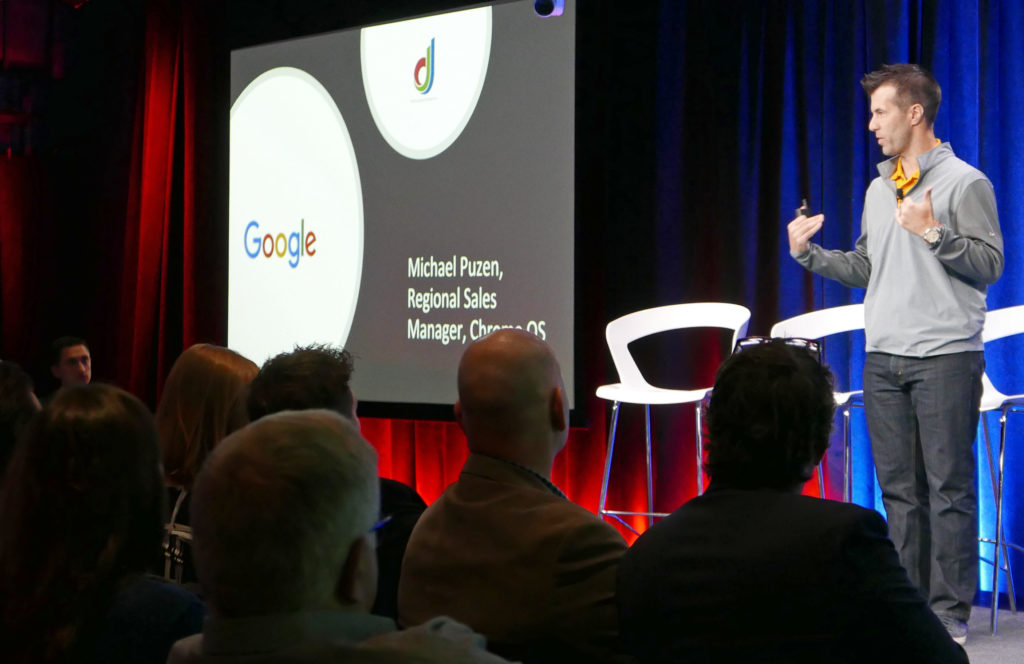 Michael Puzen, regional sales manager, Chrome OS, at Google, explained how retail is evolving in all respects, not just with more public digital displays and content. And the solution to each piece of the puzzle is dependent on an integrated approach.

Capping off the sessions at the Google offices, Michael Puzen, regional sales manager, Chrome OS, at Google, explained how retail is evolving in all respects, not just with more public digital displays and content – and finding each piece of the puzzle is dependent on an integrated approach. Puzen’s specific DOOH and display and digital at-retail content material, was a bit too introductory in nature for most of the event’s attendees, but he did point out, backed by data, that retail’s challenges are on all fronts, not just “shopper engagement” with displays and digital content. And that’s a message many in the digital signage and DOOH industries need to hear. They too often validate the adage that “when you’re a hammer, everything looks like a nail” – an adage that applies to the digital realm as much as it does in the larger world. And as any shopper knows, entering any retail space – especially large retail stores – it’s often immediately apparent that the lack of helpful sales associates to greet or help you (more often a lack of store personnel on hand, period), poor customer service in general, and woefully thin inventory on the shelves (compared to what you can easily find online) is the primary problem. And it’s a problem that digital signage won’t cure, no matter how many times industry pundits say that digital messaging can fix all of it. Retail really does need new solutions on every level, and Puzen reminded us that a company like Google – that has not been all that aggressive in the strictly “digital signage” space – along with other tech giants like Apple, ATT, Amazon and others, are working to reinvent retail. And none of them are hammers looking for nails, they’re quietly or not so quietly engineering the store of the future as many in our industry are still large screen-obsessed.