AVIXA has named Steve Somers, recently retired Vice President of Engineering, the winner of the 2019 Mackey Barron Distinguished Achievement Award. Each year the trade association representing the commercial AV industry worldwide recognizes outstanding AV professionals for their contributions, leadership and commitment to excellence. The Mackey Barron Distinguished Achievement Award is the highest honor bestowed upon an industry member by AVIXA for a lifetime in pro AV. 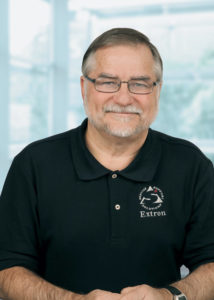 In his 30-plus year career, Somers made significant contributions toward the establishment of Extron as an  AV technology leader, while also serving the industry as a whole. His vision and leadership were integral to the InfoComm Projection Shoot-Out from 1992 to 2001, a bellwether industry event that contributed to the trade show’s success. Somers was named AVIXA’s Volunteer of the Year in 2009 and served the association in various capacities, including as an adjunct instructor and member of the Professional Education and Training Committee.

“With his stellar career at Extron and lifetime contributions to the AV industry as a whole, Steve is the epitome of all that the Mackey Barron Distinguished Achievement Award represents,” says Andrew Edwards, President of Extron. “It’s a pleasure to congratulate Steve for receiving this well-deserved recognition.”

Each year, AVIXA recognizes outstanding AV professionals for their contributions, leadership, and commitment to excellence. Members of the industry nominate individuals for the Adele De Berri Pioneers of AV, Mackey Barron Distinguished Achievement, Fred Dixon Service in Education, CTS Holder of the Year, Educator of the Year, Women in AV, and Young AV Professionals awards. The Harald Thiel Volunteer of the Year Award is bestowed by AVIXA staff. Somers and the other honorees will be recognized in a ceremony on InfoComm 2019’s Center Stage at the Orange County Convention Center in Orlando, Florida, on Wednesday, June 12, at 4 p.m.

For more information on the 2019 AVIXA award winners, click here.