Premier Mounts, AVIXA, and Top AV Companies Give Back to the Community

January 17, 2020 – Pro AV, IT, and Digital Signage industry pros have many “case studies” thrown at them each year – all promising a look at the future of, well, fill in the blank: AV-IT convergence, collaboration trends, technology for sports, education, enterprise, or any combination thereof. But every once in a while an installation happens that peels back the hype and just makes you feel good about being part of an industry that goes above and beyond, and gives back to the community.

An AV installation recently caught our attention that shines a light – beyond tech trends – on three interesting developments that deserve more attention as we head into 2020. Those three things are: a world-class charitable initiative continuing to work for others, top-tier AV equipment suppliers giving back to the community, and an AVIXA Council that is not just giving back but garnering more attention to a much-needed resource for pro AV. All those came together in one place last fall, when Premier Mounts was asked to participate in a charity project for the Ronald McDonald House in San Diego– in partnership with AVIXA and MediaCentric.

Premier Mounts is of course an industry leader and has established itself as the go-to company for mounting solutions for every display option from LCD to the largest direct view LED. AVIXA needs little introduction, but where AVIXA overlaps MediaCentric – and how both worked in synergy with Premier Mounts – is where it gets both interesting, and inspiring and informative of even greater things to come. 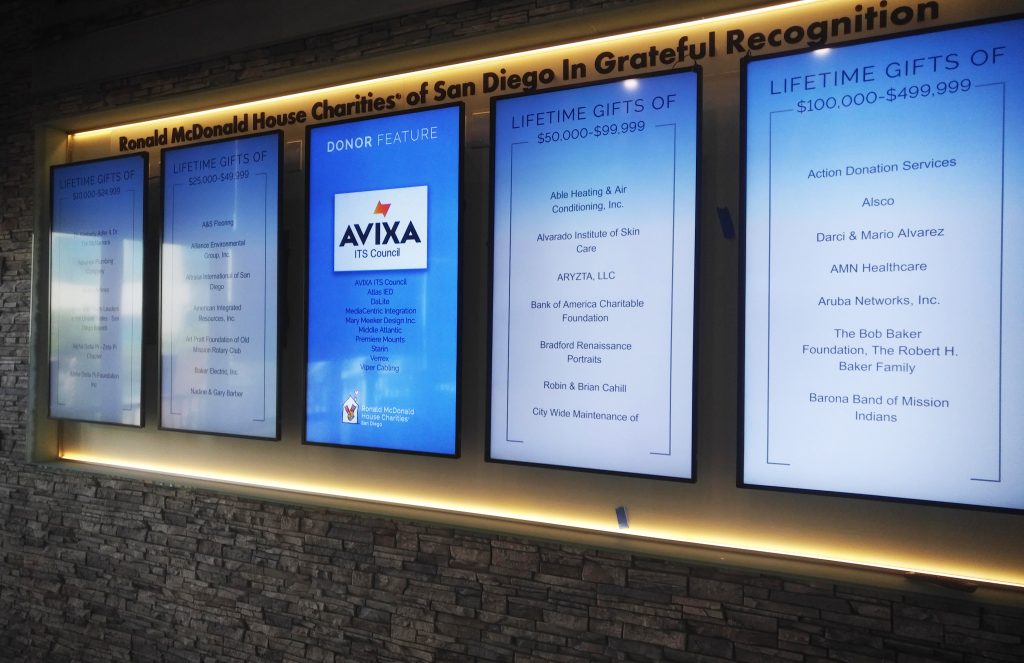 The Donor Video Wall, at the front of the Ronald McDonald House San Diego, to Display all the many Corporate Donors and events and accolades. Premier Mounts donated the Mounting systems for the installation – that ensured that all went smoothly.

The folks at the helm of McDonalds have long been know for their charitable giving, including, famously, the Ronald McDonald House Charities programs (RMHC) and the RMHC/HACER National Scholarships, to myriad other donations to many causes. And that good work goes on. The AVIXA Independent Technical Services (ITS) Council just completed its second charitable project, installing a complete AV presentation and sound system for Ronald McDonald House (RMDH) San Diego. The council’s first initiative was for RMDH Washington, DC. in 2018, but this latest project in San Diego became more extensive, as they were remodeling their “Great Room,” where they host families for meals and recreation, and hold charity fundraising events. They did not have any plans for an AV System at all, so the AVIXA ITS council proposed providing one.

How did AVIXA’s Independent Technical Services (ITS) Council get involved? There is no one better able to answer that, than Mark DelGuidice, the

AV Services Director at MediaCentric, and also the AVIXA ITS Council Chair. Mark was in fact the prime mover in the creation of the ITS Council.

“I went to Randy Lemke,” DelGuidice commented, referring of course to the past AVIXA executive director, “and asked him to help me find the other independent companies in the AV industry. And, well, Randy said, start a Council in InfoComm.”

And so the Independent Technical Services Council was born (its inaugural meeting took place at InfoComm ’09) to provide a community within InfoComm (now called AVIXA of course) for independent professional companies that provide things like programming, CAD drawing. Independent Technical Service Providers supply skilled technical labor for projects on an outsource basis; they do not sell and are not dealers, but act as subcontractors to larger integrators who need skilled technical support. DelGuidice is the President, and the ITS Council now hosts about 45 companies. Under Mark’s leadership, the ITS Council now has a prominent goal giving back to the larger community, not just to AV. And indeed they do. The first project was the Ronald McDonald house in DC.

“We did a nice 70 inch display for DC. Some of the gear was donated by Bill Mullin at Starin. Other members of council also donated game controllers, and more, for a nice entertainment room for the kids. And with that under our belts, we wanted to do more.”

One thing led to another, and to San Diego. The original idea at RMDH San Diego was to implement a typical AV event/ presentation system in the Main Dining and Event Hall, just adjacent to the front lobby. This area hosts daily stuff like meals and dining, Sunday afternoon casual events for the guests, charity events, hosted corporate sponsor dinners, and more.

“For the Grand Room, they had a projection screen,” said DelGuidice, and would use a projector on a cart for movies and TV, that projector has broken down and was no longer usable. So our proposal, reflected in the drawings, included a new projector (Epson laser projector, mounted high) on a ceiling mount, to show TV and movies on a new 14 foot screen (Da-Lite). And a better sound system, ceiling speakers, an amp, and a small auto mixer. And a wireless mic combo kit with a couple of hand helds and a Lavalier (Atlas). We did rack in a designated corner to hold everything (Middle Atlantic, they have sponsored many things in past). And a small control system from Crestron with a rack -mounted touch panel to control everything. For collaboration in the room when needed, ClickShare from Barco was put in. 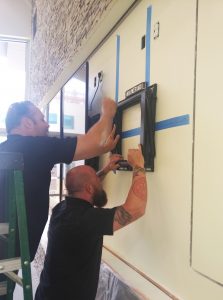 Installing the Premier Mounts LED mounts for the Donor Wall.

“It was about six weeks before we were scheduled to open, and the RMDH San Diego folks said ‘what about video wall – a Donor Wall?’ Of course. So we had to design it all very quickly. I reached out to Tiffany at Premier Mounts, because I know she’s a go-getter, and very community-involved. And lo and behold it came together. LG displays, and LG’s EZSign CMS was used for the Donor Wall. And we used Reach Media Networks, for the installation. And I can say, thank god for Premier mounts. We were very appreciative of the minute adjustability of their LED mounts – it really let us do it fast, and efficiently. (We are now certified for Premier Mounts installation – we’ve installed thousands of mounts over the years.) We were not provided any real architectural design, measurements, or specifications, only a designer’s ‘rendering’ of what they wanted it to look like, so the guys had to measure out the space, figure out distances between each one, which had to be precisely equal, etc – all to the highest standards. Those mounts from Premier Mounts made a real difference in the install. And Tiffany understood the tight timeline, and made it happen.”

Many manufacturers and AV companies came together to donate the AV equipment for the Donor Wall. In addition to the above, MediaCentric and Viper Cabling provided local labor. The displays were 55″  LG, SE3KD ‘s, provided by PROTEL Communications, Inc. of San Diego at a discount (there was some budget for displays). The media players were, for the smaller walls Seneca VWC players and for the large wall Seneca HDN’s. 16′ HDMI cabling broke out each connection to each display. Reach Media Network provided the Content and the media players. 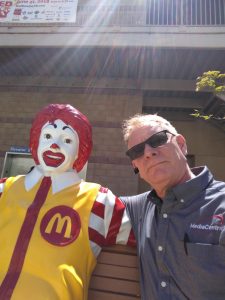 Mark DelGuidice, the AV Services Director at MediaCentric, is also the AVIXA ITS Council Chair.

“It’s awesome how the industry comes together for a cause,” said DelGuidice. “The donor wall puts an entirely new vibe on the space. The RMDH staff are very grateful and excited. They now can host many activities for the families and essential fundraising events properly. AVIXA Councils are now looking at joining forces to do more RMDH projects moving forward. I am very proud to have led the project and thankful to everyone who helped.” 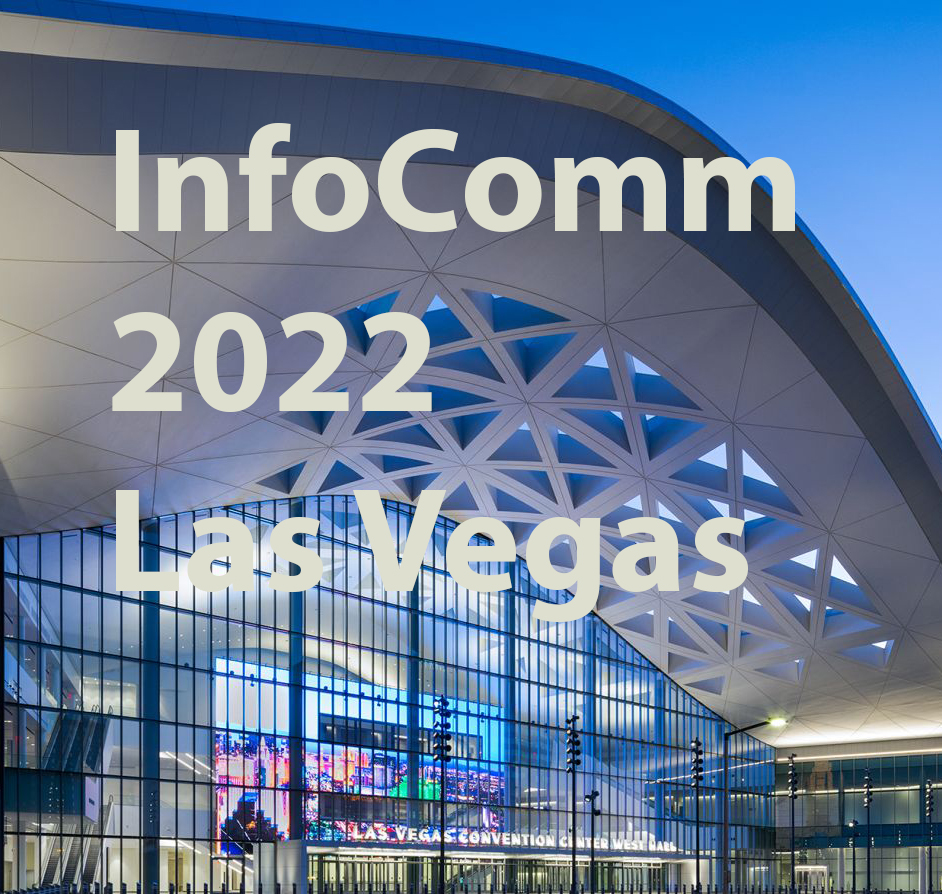 "Being in front of folks is the big difference, and coming to a show like this, seeing the integrators, seeing our manufacturer partners, reassuring everybody that AV is back is probably the most important thing" #tbt to #infocomm22 @InfoComm! 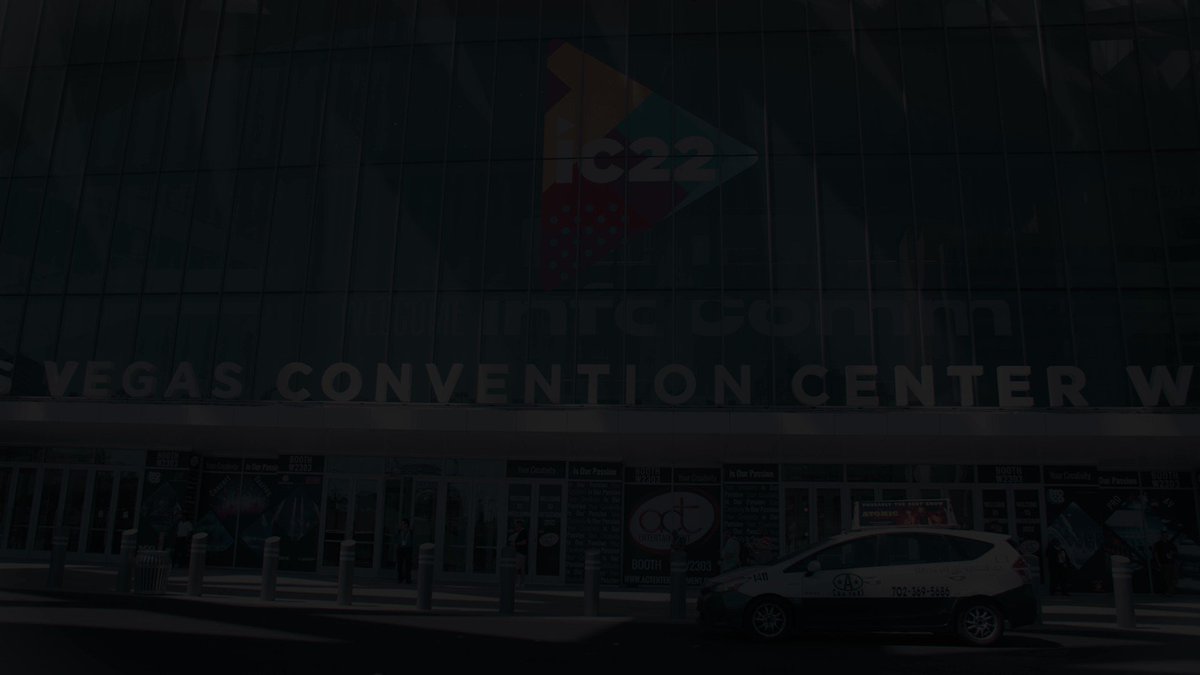 When the @GoldenKnights needed help for their season opening projection mapping vs @SeattleKraken, they found inspiration at @AREA15official. Andrew Abrams, VP of the Golden Knights describes in this clip. 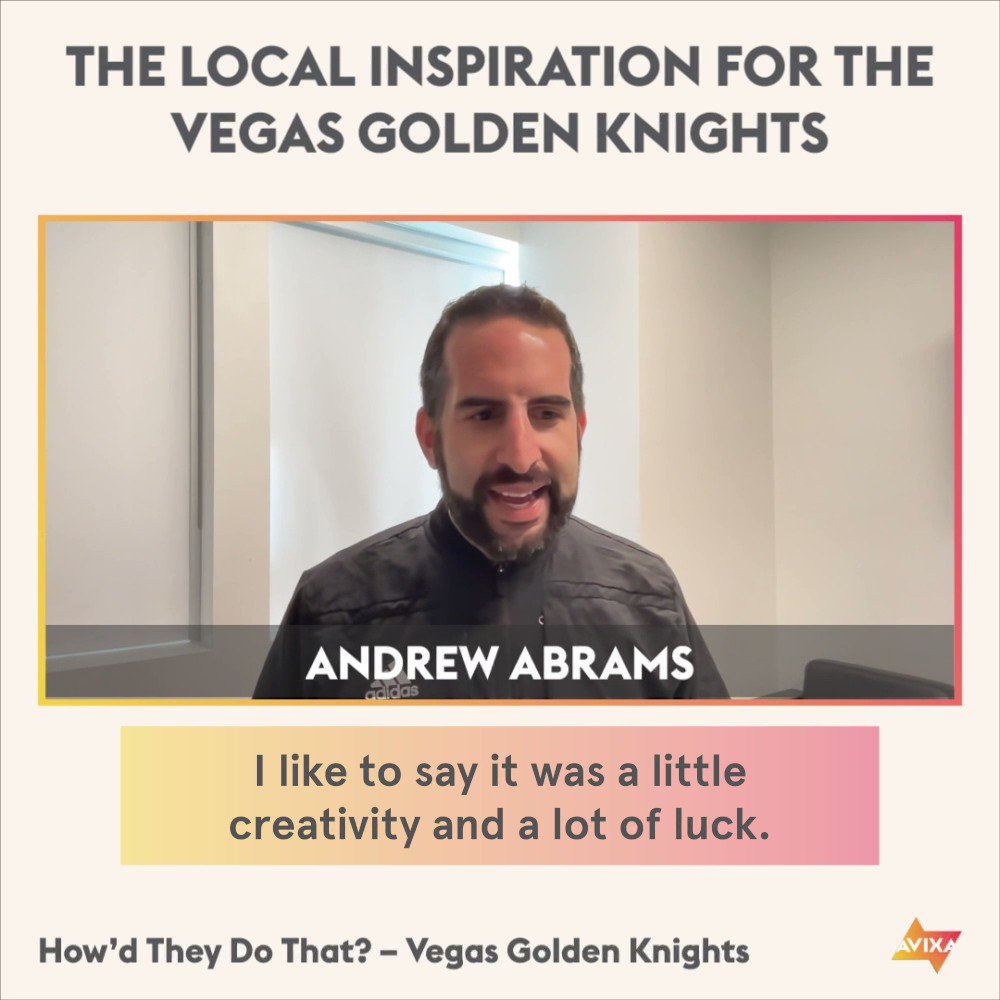 The academic world has significantly benefited from virtual reality, which is being used to provide students with more realistic and accurate learning experiences: https://bit.ly/3mKys2E
#MarketingMatters #MarketingMattersPR @AVIXA @AVTweeps @PROAV