January 17, 2020 – Digital displays have moved into every kind of public space today. Their incusion is expected now in applications from airports and malls to lobbies of companies and university buildings. But a recent application at a company and venue you normally associate with restrained elegance points up several trends in both technology and the changing demographics of legacy industries more recent to the digital transformation. The company in question was, according to their logo, established in 1744 – but new ownership there now means that, well, Sotheby’s is no longer your grandfather’s auction house. Case in point: a recent partnership between Sotheby’s and Samsung features bold use of the latest direct view LED technology in the form of Samsung’s innovative new display, The Wall. 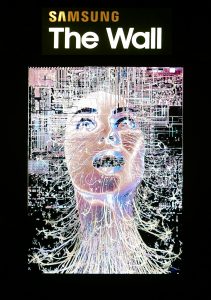 One of the most interesting artworks on display in the auction preview was from Dr. Greg Dunn in collaboration with Dr. Brian Edwards, titled Brain Machine Interface, 2018. The animated reflective microetching is a piece about the interconnected future of the human brain. Shown here: Samsung’s micro LED display, The Wall in the Sotheby’s gallery shows the work to visitors in other parts of the galleries and captures its dynamism and depth.

Just after Thanksgiving, I visited Sotheby’s New York City showrooms to see what the latest display tech was going to contribute to a gallery preview for the December 17, 2019 “History of Science & Technology” auction featuring some antique items old by any standards – even Sotheby’s. I had gotten a glimpse of a few of the fossils, minerals, and meteorites online, and a few notations on the age of items struck me – a 30,000,000 year old Gogotte formation from France was on offer, for example. But that was actually a newer item compared to the 55 million year old crab fossil from Italy. Beautiful specimens, all, but it was a delightful surprise to arrive at the auction preview and find that many of the items were from eras closer to our own. Several German WWII Enigma machines were on display, an early Apple corporation “neon rainbow logo sign” among other early Apple items, a variety of early digital era devices and consoles, and ground breaking personal computers. On the more intellectual side of things, first edition books from some the pioneers in modern physics were being offered, as well as original letters from the likes of Einstein and Darwin.

Visitors to the gallery auction preview saw a prominent feature that went outside the box of your typical, staid gallery presentation. That feature was Samsung’s The Wall. And interestingly, the latest micro LED display from Samsung was used primarily to help some of the prominent science and technology-themed contemporary art on display resonate with the entire space and with any visitor to the space. That’s a testament to not only Samsung’s display prowess but to Sotheby’s vision of shaking up old art and antique silos and combining things in fresh ways for new as well as legacy customers.

One of the most interesting artworks on display in the auction preview was from Dr. Greg Dunn in collaboration with Dr. Brian Edwards, titled Brain Machine Interface, from 2018. The animated reflective microetching is, according to Sotheby’s, “a piece about the interconnected future of the human brain. It simultaneously comments on both the amazing benefits and potential dangers of these powerful neural interfacing technologies, and will hopefully serve as a reminder to humanity to proceed with cautious optimism. As the viewer moves from the left to the right of the etching, neurons synapse into and create a face initially with a terrified expression. This symbolizes the average person’s fear regarding the future of human/machine evolution, particularly concerning the more invasive implant technologies currently being utilized. The etching then transitions into an expression of awe, relief, and joy upon their successful implementation – restoring lost functionality, enhancing human cognition and communication, greatly increasing our access to information, etc. Finally, circuits spray out of the face and symbolize this evolution toward enhancing human potential.”

According to Sotheby’s, Brain Machine Interface is the first and largest etching of its kind to ever be made available to the public. Microetchings are handmade lithographs that manipulate light on a microscopic scale to control the reflectivity of metallic surfaces in precise ways. These techniques were invented by Dunn and his colleague Edwards in order to change the way in which the viewer experiences a painting.

Also from Dr. Greg Dunn in collaboration with Dr. Brian Edwards, was  Chaotic Connectome, from 2013, the first microetching ever produced, depicting an abstract neural landscape. This piece was initially developed to illustrate the depth of complexity of any given region of the brain through designating specific sets of neurons to different reflective “channels”. From Sotheby’s catalog: “Microetchings are handmade lithographs that manipulate light on a microscopic scale to control the reflectivity of metallic surfaces in precise ways. These techniques were invented by Dr. Greg Dunn and his colleague Dr. Brian Edwards in order to change the way in which the viewer experiences a painting… microetchings are designed to evolve based on the moving perspective of the viewer and are impossible to capture in still images.” 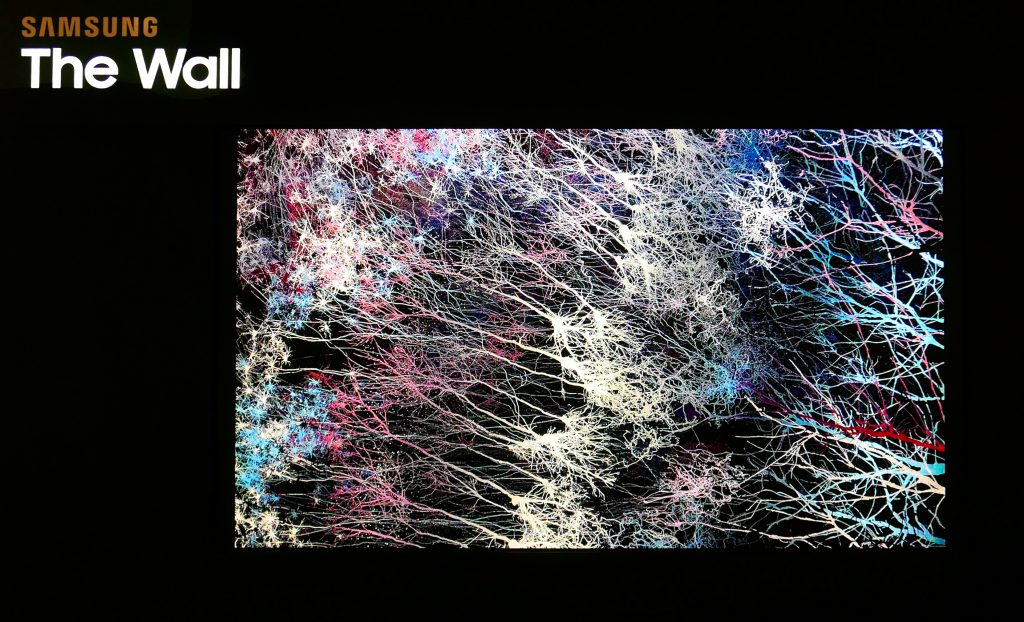 Also from Dr. Greg Dunn in collaboration with Dr. Brian Edwards, 2013, Chaotic Connectome is the first microetching ever produced, depicting an abstract neural landscape. This piece was initially developed to illustrate the depth of complexity of any given region of the brain through designating specific sets of neurons to different reflective “channels”. Shown here on Samsung’s The Wall in the Sotheby’s gallery.

“Integrating The Wall into Sotheby’s History of Science and Technology exhibition is a visual demonstration of recent advances in technological innovations and how Samsung continues to redefine modern solutions and elevate customer experiences,” said Mark Quiroz, Vice President of Product Marketing for Samsung Electronics America. “The Sotheby’s exhibition was the perfect environment to showcase how The Wall’s revolutionary viewing experience, modular nature and slim depth complement any gallery or showroom.” 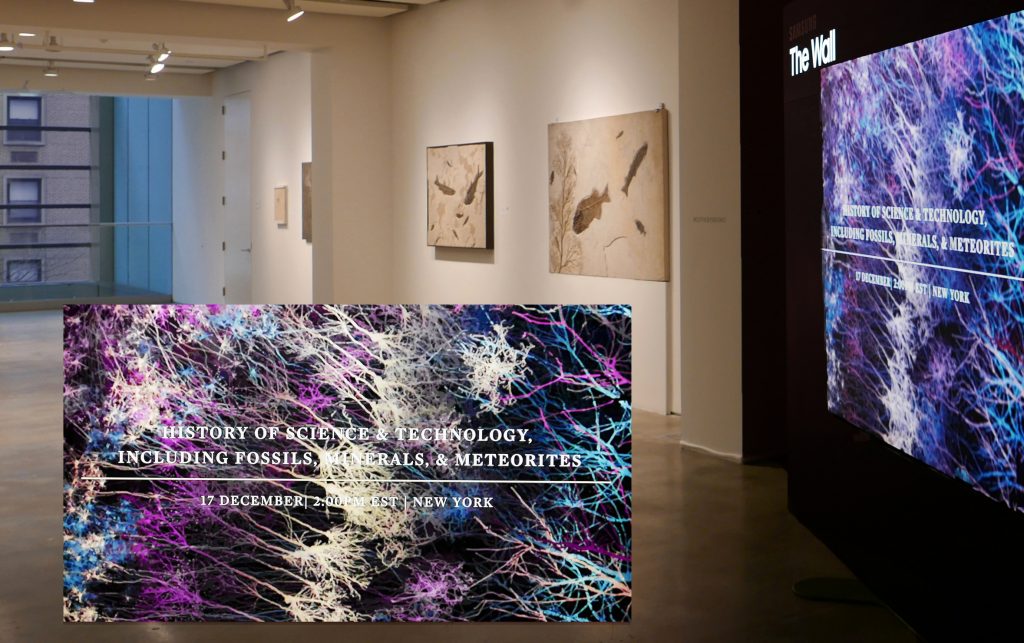 A bold statement from Samsung, but I saw this with my own eyes – and I’ll add that I’m an art collector and incurable museum and gallery hound who’s visited the best museum and art spaces on 4 continents. For this analyst, if anything added to a gallery space does not serve the experience of the art, it’s superfluous. What Sotheby’s is doing here is a sign of things to come. Bold, but necessary in a changing market, and in this case, done very well. 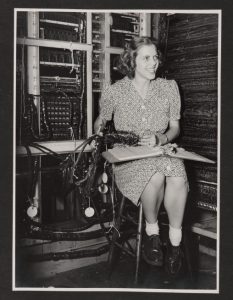 Anonymous woman computer architect. (Editor’s note: can we fix that?). From lot #39 of the auction: Harvard Computing History, Album of Vintage Photographs of the Harvard Cruft Laboratory and Construction of the Harvard Mark I, circa 1944-1965. This archive of photographs depicts Harvard’s Cruft Laboratory, and the construction of the famed IBM Automatic Sequence Controlled Calculator (the Harvard Mark I), shown in various states of assembly from empty concrete room, to blown out doorways and delivery of components, to installation, testing, and opening ceremonies.

For high end auction industry analysts, none of this – combining fresh approaches and new technology for the presentation and marketing of old things – should come as a surprise. Under Sotheby’s new ownership there is a new emphasis on finding new market opportunities and not relying on old business models from 100 years ago – actually the models of that vintage are the more recent ones at some of the auction houses, coming with impeccable provenance and nice patina if a bit worse for business wear. To that end, Sotheby’s has put all its Fine Arts silos into one division, and created a new one called Luxury, Art & Objects that combines the high-growth areas of jewelry, wine, watches, but also includes books and Asian art. And part of Sotheby’s strategy with the new division is to pursue new sales channels and new approaches to growing markets.

Stefan Pepe – whose title, Sotheby’s Chief Product & Technology Officer, says a lot about the company’s new mandate – commented that “as a global leader of information technology and enterprise mobility, we were thrilled to partner with Samsung to feature The Wall in the exhibition for our History of Science & Technology auction. The Wall represents an innovative way to showcase the rare and unique objects we sell, delivering a dynamic viewing experience for our clients.”

Samsung reports that Sotheby’s looks to continue their partnership with Samsung globally in 2020, integrating Samsung products in exhibitions and auctions.

Digital displays in the lobby of Sotheby’s New York offices and galleries feature changing content that highlights events, auctions, and more. (Lobby displays are not part of Samsung’s partnership with Sotheby’s.)

It used to take quite an extensive loudspeaker system to reach audiences. But it's no longer the case, thanks to column arrays. Since these #speakers can be hidden & blend in easily, they are a big win in #HousesOfWorship #CanYouSpotIt #AVIXAXchange https://bit.ly/3Vzw91G

Today's labor market is one of the most challenging in recent memory. Watch our new video 'The Idea Xchange' and share your stories of how you've navigated workforce shortages in #ProAV by logging on to #AVIXAXchange👇 @PamTaggart9 @Mersive @FASTSIGNS
https://bit.ly/3XMiWnT 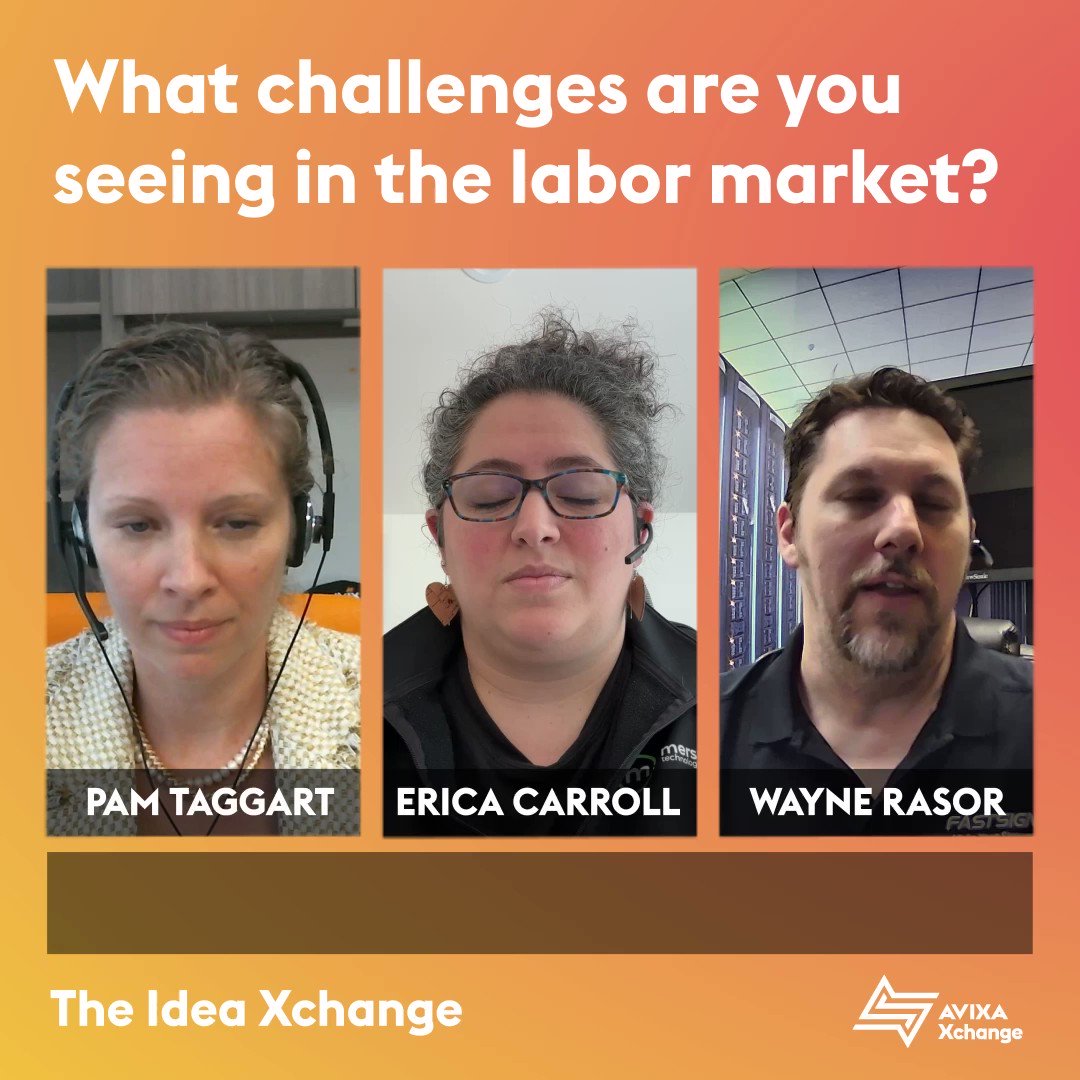 Join the conversation because wage gap is more than compensation. Intentional consideration of the challenges POC and women face in our industry is an area of alignment between alleviating the #proAV #workforce issues & doing the right thing. https://bit.ly/3E1K21g @LAVNCHCODE 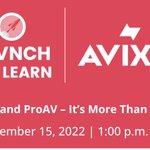