A Conversation with Jeff Hastings, BrightSign

BrightSign released BSN.cloud and BrightAuthor:connected as a public beta on August 12, 2019. Click here to learn more

The media player discussion, in the digital signage market, has evolved in a variety of ways in recent years. Remember all those Android-based media players we all saw at the trade shows say 5 years back? Cheap Anroid players have mostly vanished from serious consideration today. Remember when Google exhibited at the Digital Signage Expo? They’re now conspicuously gone. SoC (system on a chip) came onto the scene starting about five years ago, and that was introduced by some of the large screen manufacturers as an “easier” way to do digital signage. Ostensibly, no need for a separate media player, the player/SoC was built into the screen).

But through all the evolutionary changes of screens and players, the “digital signage” market evolved not to a more “simple”, short-cut approach, but to more sophisticated needs and more ambitious rollouts. From the simpler rollouts like airport screens and digital menu boards a decade ago to today’s complex wayfinding, massive retail rollouts, and experiential display-based systems that highly sophisticated companies such as Moment Factory and Obscura design and deploy, the industry seems to be gravitating toward best practices that leverage the new capabilities of software-driven media players and cloud control of those players in the field. 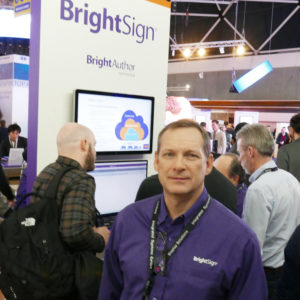 To put recent developments in context, there’s probably no better person than Jeff Hastings, the CEO of BrightSign. While BrightSign is a “media player” provider (outcompeting a very long list of hardware providers), they are much more than that. BrightSign launched in February this year an ambitious new offering to the world – that demo’d at ISE in Amsterdam in February, at DSE in Vegas in March – and will be shown at InfoComm 2019 in Orlando. BrightSign’s new BSN.cloud is based on new functionalities in three areas: Control, Management, and Content. The Control Cloud offers BrightSign customers simple provisioning and setup options and real-time data about player health. The Management Cloud is a data-driven cloud service that delivers a complete set of digital signage network management tools to the end-user. At the highest level, the Content Cloud adds the media library and content feeds, schedules, presentation management and content distribution tools.

I spoke with Jeff recently and asked him to sum up their broader vision for the digital signage industry, as well as their new offering.

David Keene: Control, Management, and Content. Indeed, those are the three main needs – to get the content to the screens, manage that content, and manage the hardware – of a digital signage rollout. Previously, both BrightSign and all the CMS companies out there, were good at some of those things, but it’s always been a “cobble it together” kind of approach, hasn’t it, in digital signage? And frankly integrators and end users have always been confused as to who does what, better, in the chain. BrightSign provides media players for digital signage – and the software to integrate the various hardware components of a rollout – so how did you see that landscape, and what was missing, for more efficient deployment, and management?

Jeff Hastings: At BrightSign, we have done so many CMS integrations over the years, and we started seeing the patterns. For example: a lot of our devices [media players] were installed in digital signage systems where the screens were not even connected to the Internet. They used SD cards to get the content to the screens. And they used our base software. The thought from the AV integrator was, “don’t worry about connectivity, the customer can add that with the CMS application…” The net result: all these people were re-writing code, for connectivity. That meant the CMS had to do all the content, but also add connectivity. From any perspective – industry and market growth, cost of a particular deployment, management efficiency – it was holding everyone back.”

Hastings: Two things: now, more screens in digital signage are connected. So the need is more urgent. And to address that, we re-architected how our OS works with not just our players but with third party CMS’s and with end users’ control needs. Based on that, we’ve now built the best, most robust connectivity features into our OS and into BSN.cloud – to address the new, wider landscape, but also to improve functionality not just expand the market.

Keene: But how do these new tools help, specifically, each important part of the chain, AV integrators, end users, and CMS providers? Let’s start with CMS providers.

Hastings: The good news for CMS providers: we’re going to reduce their engineering workload. We have super tight integration, all the way into our platform, that we’re serving up as web APIs, so our partners get all that rich information. Instead of them having to build custom software, they get our APIs and each can then offer up the features that they want. It’s all readily available so each CMS provider doesn’t need to build custom software to integrate with our players. We’ve built that layer into the BrightSign OS and changed the landscape for digital signage.

Keene: And that’s possible because of the new APIs?

Hastings: Until now, no one had the right or enough API’s at all three levels – Content, Management, and Control – to optimally integrate the CMS of a third party provider with the software layers of a BrightSign solution. Our new APIs and BrightSign OS 8.0 are key to making it all work. The Control and the Management Clouds are especially useful to our CMS partners. The APIs here greatly increase the ease of setup and deliver a robust set of network management tools that many of our partners weren’t offering to their customers in the past.

Keene: So the message to CMS partners, is that you’re making their life easier?

Hastings: Yes. In the past, sometimes devices simply had no sophisticated management. Or, we’d hear: “we want to use Chromeboxes because they have a management console.”– but that was a separate and very difficult system to set up and/or one they had to pay for. Now, you can have control included with the media player and management at a nominal fee. We are also integrating with people that are doing mobile device management. It’s a big value add for everyone. 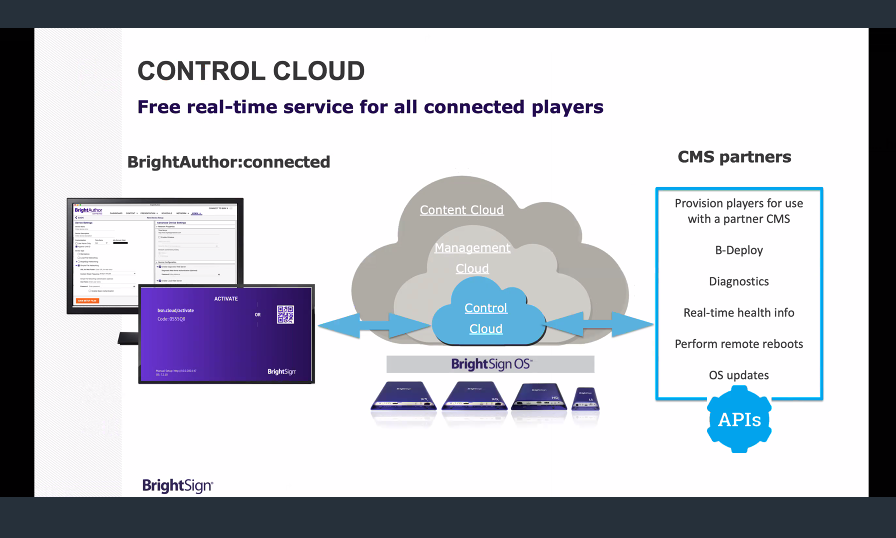 The Control Cloud part of BSN.cloud lets the end user see more clearly, deeper, in real time – allowing real time service for all connected players. And the new APIs at the heart of BSN.cloud allow all BrightSign CMS partners to more easily integrate with BrightSign players.

Keene: For the end user of digital signage systems, what are the benefits of BSN.cloud?

Hastings: For the end user customer, whether they use our interface, or a CMS interface, they get a lot more capability. Assuming the integrator has already set up and provisioned the player for the end user, the Control Cloud will bring real-time information about player health, the ability to push OS updates and perform remote reboots. Then, they get a complete set of digital signage network management tools with the Management Cloud. The end user can now “look” at the devices at a depth they did not have before. And they get control over devices like they’ve never had before. The Management Cloud collects and stores data about performance measures that are important to network managers such as advertising proof of play, player performance and health, remote snapshots, etc. It even pushes out email notifications about issues important to end-users such as a subscription that is about to expire or players that are reporting errors. And for end users, the Content Cloud adds the media library and content feeds, schedules, presentation management and content distribution tools.

Keene: So bottom line, for the end user?

Hastings: The Control Cloud part of BSN.cloud lets the end user see more clearly, deeper, in real time; there’s a bigger set of tools; they can update the OS; it’s easier to deploy, and is up and running faster than a Windows-based system; and it’s no cost – it’s a free subscription with the player.

Keene: OK, so for the AV integrator, what are the major benefits of BSN.cloud?

Hastings: The AV integrator, in digital signage, has two ways they can go for any DS deployment: they can cobble together a solution for their customer from hardware (screens, and media players) and a third party CMS. Or, they can offer the customer their own customized solutions – with the most “custom” part of that being their own custom CMS. So BSN.cloud really gives them better tools, to do either of those approaches. BSN.cloud makes it easier for an integrator to build their own customized solutions, build their own platform (and some integrators may want to use BrightAuthor:connected in that effort). But BSN.cloud also makes it easier for the Integrator and their customer to go with a third party CMS – it gives them a wide selection of CMS’s to choose from, and they all integrate more easily now with our players. That’s key to understand. The new APIs at the heart of BSN.cloud allow all our CMS partners to more easily integrate with our BrightSign players.

BrightSign released BSN.cloud and BrightAuthor:connected as a public beta on August 12, 2019. Click here to learn more